How to Use a Bidet & What is a Bidet 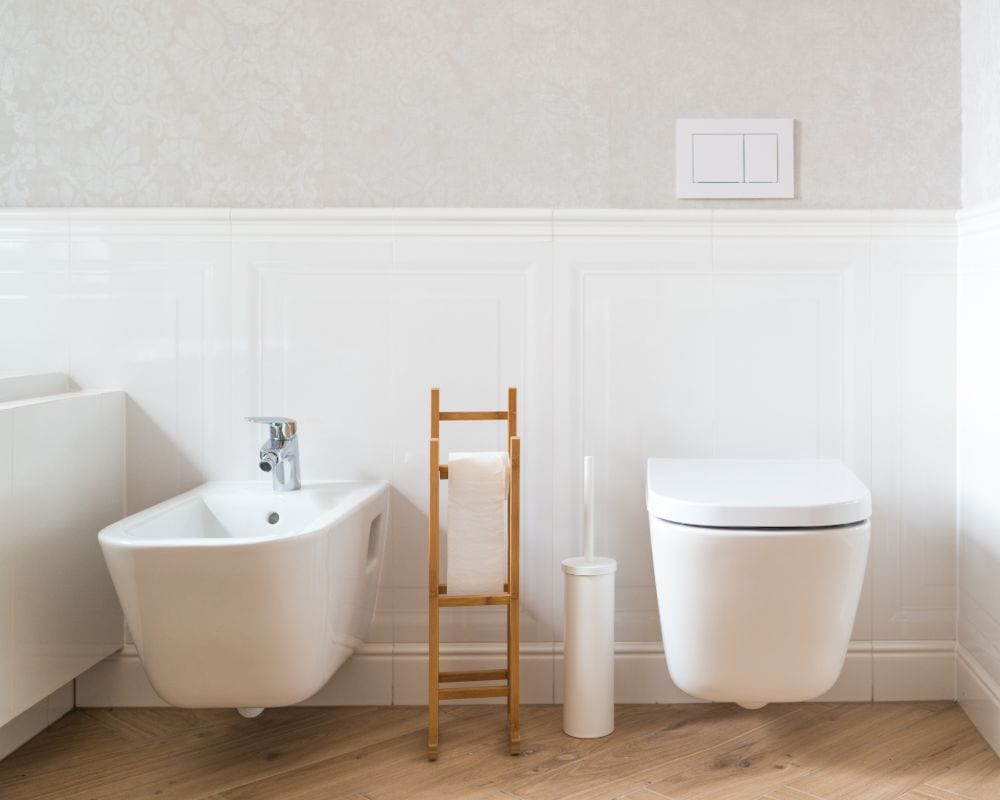 17 Billion toilet paper tubes are thrown away each year. Which is enough to fill the empire state building twice. You may be wondering what this has to do with bidets.

Are you interested in being more councious about the environment? Is decreasing the amount of germs spread in your home important to you? A bidet, while not know for these qualities, will help.

In This Article We'll Discuss

How to Use a Bidet

Since bidets are uncommon in the US many are unfamiliar on how to use one. Below are the written steps on how to use a bidet and a helpful video. Step 1: Use the toilet A bidet is meant to clean and wash up after using the toilet so this is the first step. Bidets are not an actual toilet and number 1 and 2 should NEVER occur in a bidet. You can use the toilet followed by toilet paper then the bidet. Some skip the toilet paper.  For bidet toilet seats you should remain on the toilet seat for the process. There is a button that is labeled to start the water flow. Step 2: Straddle and sit on the bidet. Here is why it makes sense that the word bidet originates from the french word for pony. This is for bidets that are a stand alone fixture. You can sit facing towers the controls or away. They’re typically valves.  See were the stream is hitting before you are in direct contact with it. Start slow as some bidets shoot water up quite high. Adjust the temperature so it is comfortable before use. Depending on the model or style of the bidet you may have to remove your pants to get on. Different models will come with instructions on how they should be mounted. Bidet toilet seats will warm up to the desired temperature and begin to work.  Step 3: Rinse Now that the water is ad a comfortable temperature it is time to rinse off. Slowly turn the pressure valve to the desired steam. Be careful as some bidets are sensitive and will shoot a fast stream with a slight turn of the valve.  Most bidets will have three valves. One for hot water, one for cold water, and a valve that controls the pressure.  Step 4: Move Around Now you can move area the bidet to wash off the desired areas.  Step 5: Dry Off All you have left to do is dry off. Toilet paper and towels are used for this. If there is a ring with a towel on it attached to the bidet, that is the purpose of the towel. Step 6: Congrats You Made It You’ve officially used a bidet and made it. Congrats!Recommended Read: Best Bidet Toilet Seathttps://www.youtube.com/watch?v=aCAiJO-83-E

With health being so important to everyone now a days you’d expect there to be some research on how hygenic a bidet it. Unfortunately there hasn’t been a scientific test on this?  Yet, water is one of the best and cleanest ways to clean yourself. Dr. Donnica, a women’s health export proclaims. Our hands can get pretty germy and it makes sense that using water instead of them to clean will be more hygienic.  Recommended Read: Best Toilet Brush For women, feminine wipes are used and they can irritate your you skin. Water is natural and a bidet can be a good option to lower the risk of this.  Another jarring fact is that only 5% of bathroom users wash their hands correctly. It’s pretty scary thinking what the other 95% of the population has left on their hands. Having a bidet will help with this in your home. All in all, we have our common sense when it comes to this matter. It’s up to interpretation on wether bidets are more hygienic. My vote is that yes they are. Recommended Read: Best 10 inch Rough in Toilet

Since you can skip on toilet paper with bidets you can save $150 or more a year on toilet paper. It does use water and your water bill will go up but not much compared to the savings on toilet paper.  Recommended Read: Best Rear Discharge Toilets How much water does a bidet use exactly? Apparently about an eight of a gallon of water per use.  Another thought is less stress about clogged pipes from toilet papers.  A con is the space a stand alone bidet can take. But with wash-lets and bidet seats they will occupy the same space as a toilet.  Recommended Read: Best Composting Toilets

Is The Bidet Coming Back in the US?

With bathrooms shrinking it’s unlikely that stand alone bidets will be coming back any time soon. Yet, bidet attachments and bidet toilet seats are on the rise in popularity. In the 1960’s an invention by Arnold Cohen is where the bidet attachments and bidet toilet seats began. During this time many in the US had not heard of a bidet so it was a slow start for this company.  Recommended Read: Toilets With The Strongest Flush Later on Toto Ltd noted Arnold’s invention and started selling it as a “washlet”. More than half of homes in Japan have this installed and it’s popularity continues to grow in the US. The increased comfort of using a bidet vs toilet paper has helped it again popularity. A push for environmental stability has aided as well. Americans use about 50lbs of toilet paper annually. It goes without saying that switching to bidets would save a lot of trees.  They are an easy way to clean up. Recommended Read: The Best Corner Toilets Reviewed

How Much Does a Bidet Cost?

Traditional Bidet  A standalone bidet is more expensive than a washlet or bidet toilet seat. Adding a stand alone bidet will need plumbing work as well.  A bidet will start at about 250$ and can go up to 750$ or more depending on brand and features. The installation can cost 200$ or more depending on the plumbing required. Recommended Read: The Best Handicap Toilet This leaves the total cost for a bidet at 1000$ which is quite expensive to live a bidet-ed life.  Modern Bidet  Modern bidets or washlets are less expensive and more practical. They come as full toilet seats or attachments you can put on existing toilets.  The best thing about these is the low cost. They start at 200$-300$. Since they don’t need plumbing you won’t have to spend here as well. There are some than range in the thousands if you’re looking for nifty features like a rear end blow dry. Recommended Read: Best Tankless Toilet Reviews Another form of a modern “bidet” are spray attachments. These are fixed to the toilet bowl and are operated by hand. They are less expensive than bidet seats but need a little more effort to use.

A Brief History of The Bidet 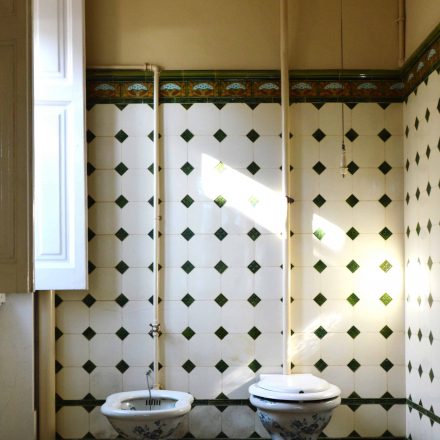 The exact date and inventor of the bidet isn’t know for certain but it appears to come from France. Earliest records are from the the late 17th century.  When they were first invented it appears they were a device used to help with contraception. They fizzled out of popularity after other modern methods arose such as pills. Recommended Read: The Best Macerating Toilet Interestingly enough, the word originates from the french word for pony. It’s quite blatant as bidets are to straddled. Bidets were such an integral part of aristocratic french society. Even Marie Antoinette was provided one in her jail cell. Image Marie waiting for her coming execution and a jailer hauling in a bidet. What a way to wait for the guillotine.  When first invented they were placed in the bedroom. After plumbing improvements in the 1900’sbidets were moved to the bathroom.  Recommended Read: The Best American Standard Toilet Early use in the united states was started by John Harvey Kellog. He patented the “anal douche”. This was a nozzle attached to the toilet instead of a stand alone device. It cleansed with water. Coming into the modern era, electronic bidets gained popularity during the 1980s. They are attachments for toilets that automate the process of cleansing. With the tiny home trend, many bathrooms don’t have enough space for a stand alone bidet.  The fact that bidets were riddled with taboo could be the reason why they didn’t take off in the US. One of its purposes was to prevent pregnancy. Americans were not a fan. Norman Haire said in 1936 “the presence of a bidet is regarded as almost a symbol of sin”. Norman was a birth control pioneer. Their slow rise in popularity now can be due to an image change of the bidet. Now that it’s known they’re terrible as preventing pregnancy, they’re seen as a way to freshen up.

Are Bidets Worth it? Some Final Thoughts

Now that we know the history of bidets, their costs, and how to use them it’s a good time to look back and determine if they are worth it.

I’d say yes, bidets are worth it. They’re more hygienic and keep a home cleaner by removing hands from the bathroom equation.

Due to the cost of a stand alone bidet it is expensive an unnecessary. You’re probably better off with bidet toilet seat. They provide the same functionality at a lower cost and don’t take up any unnecessary space.

Did you end up getting a bidet? Let us know your experience in the comments below!

SwankyDen is support by readers like you. We may earn an affiliate commission when you purchase through links on our website.

As an Amazon Associate, I earn from qualifying purchases.

Our earnings do not impact how we review products.