Home » How to Keep a Futon from Slipping

How to Keep a Futon from Slipping

By luis@Swankyden.com
Update On January 9, 2022

One of the drawbacks to a futon is that because the mattress and couch cushion sits atop a sparse frame, that it might slip down. It’s no fun sitting on furniture that might slide around underneath you.

There are a few handy things you can do to prevent your futon mattress from slipping. They might involve things you already have in your home. If you don’t, don’t fret. They aren’t that expensive to purchase.

We put all of it together here for you. Here’s hoping you find something that helps you keep your futon mattress in place.

In This Article We'll Discuss

How to Keep Futon From Slipping Step-by-Step Guide

To understand how to keep a futon from slipping, it’s important to know why they slip. In fact, knowing why might help you figure out a solution on your own.

The primary reason why futons slip is because of the materials used to construct them. The frame is usually a simple one made from metal or treated wood. Both of those can be slippery, especially since mattresses are often just foam pads covered by fabric.

Futon frames often don’t come with a lot of extras because they need to move freely. Extra pieces of metal here and there are just additional things to get snagged, especially if your futon can use some adjustment.

The primary reason why futons slip is that there is very little friction between the mattress and the frame.

So, it follows that the primary solution is to create friction between the mattress and the futon frame.

The most common way people do this is by purchasing non-skid material and placing it between the mattress and frame. There are specialized products designed for futons.

But, you don’t need to go that route. You can also just get some non-skid material, like that used for rugs. Or, you can also buy Velcro, with one side taped to the frame and the other sewn to the mattress.

One way that doesn’t involve adhesive involves straps either at the corner or along the top and bottom of the mattress. Cinch them down with the buckle and excess to the back, but make sure you have a cover to conceal that there are straps.

You might also find that the problem isn’t a lack of friction. Futons that are out of adjustment can move around in weird ways. That will lead to the mattress sliding around. So, you might find a solution in just tightening up all the screws and bolts on your futon.

What is a Futon Stop Slip? 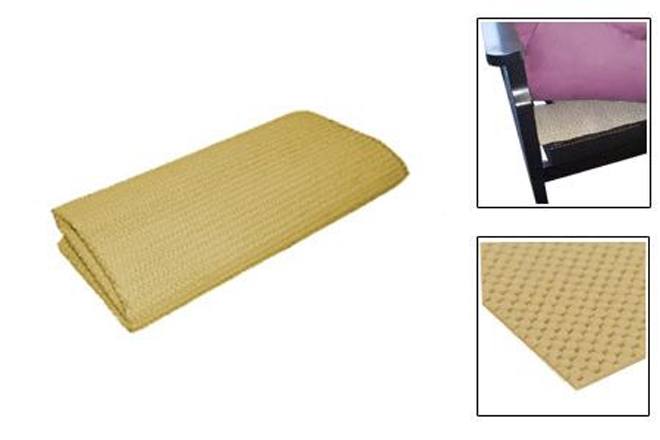 One of the reasons a futon mattress moves around is because they are essentially just a fabric-covered mattress on top of a simple frame of metal or wood. The frames have to be pretty simple to allow it to be folded in and out.

A futon stop slip is a layer of non-skid foam that you place under the mattress. It works the same way that non-skid under a rug works. It creates the friction that is otherwise lacking between the two. When used under a futon mattress, it also helps to counterbalance gravity.

You can either purchase it pre-sized to fit your mattress. You can also find it in bulk if you want to purchase in bulk for several projejcts.

What is a futon gripper?

If your futon just needs a little help staying in place, you might be able to use gripper strips to hold the mattress in place.

While you can find short pads for the bottom of your mattress, you can also buy them as a roll that you cut into strips. If you don’t need a lot of support, you can cut the strips short so they are easier to conceal.

You can also cut them longer and lay them on top of your futon slats. This will give you the most support, but it will also be more noticeable.

You bought a futon for its versatility. But if the mattress has a habit of moving around, it becomes something no one wants to sit on. That’ll turn it from a solution into something that’s just taking up space.

It isn’t terribly hard to keep your futon mattress from slipping off its frame. It’s also not that expensive. With just a couple of techniques, your futon will stay secured.

We hope you found something of value from our guide. If you did, we’d love to hear about it in a comment. Perhaps you have an idea of your own that’s worked, too. You’re also invited to share this article on your social media networks.

SwankyDen is support by readers like you. We may earn an affiliate commission when you purchase through links on our website.

As an Amazon Associate, I earn from qualifying purchases.

Our earnings do not impact how we review products.